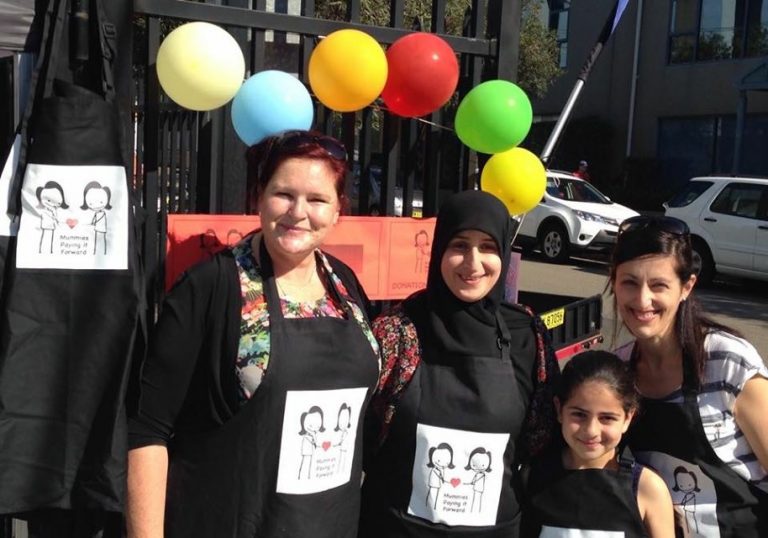 Getting to know…Mummies Paying It Forward

Founded in December 2014 by Fatma Elzein, and run by a small, dedicated team of volunteers, the group has grown from a handful of Fatma’s friends, to over 10,000 members in a short period of time.

In a sometimes self-absorbed world, what motivates you to help others like you do?
The moment it occurred to me that I can help people in need is when I visited a local charity and thought about all the items at home we don’t use. That moment really allowed me to understand the power I have to help other families and where Mummies Paying It Forward started.
I am a mum that saw a need and a way to help people and I just really pushed it. I didn’t stop when it became too much, and there were times where it got really overwhelming, but I just remembered thinking this is the right thing to do and what I should have been doing my whole life. I am passionate and believe in the good that Mummies can bring so the drive is there automatically. Instinctively, I have always wanted to help people, firstly by becoming a nurse, and this is another avenue that provides myself and other people with the opportunity to help.
Oh, and Coke Zero! It keeps me going and Mummies is run on it!

What are the guiding principles of Mummies Paying It Forward?
When I initially started there wasn’t a formula or a plan, but there were core beliefs. Firstly, we support local Not For Profit charities and ensure the goods don’t get resold – you need to believe that what you are forwarding goes directly to people who need it, and that it’s worth the time and effort to drop it at the donation point.
When there isn’t a need locally we send goods overseas to impoverished communities. Things are growing quickly and if there is a need we can fulfil we will. Through Mummies, I want to harness the excess in our society and the “get, get, get“ mentality and use it to help people struggling in life. There are thousands of things we can say about today’s society and how much we focus on materialism but I don’t want to look at it in a negative light – let’s look at the situation and what can we make from it. Let’s give the things we don’t need to people who are financially struggling for varied reasons.

Who are the Mummies Paying It Forward team?
I have a great team around me – Marie focuses on IT, management of the group, graphics, administration, and keeps us in line and on point. Sue, our regional manager, sources, picks up and drops off many goods. Cathy runs the sorting sessions at Rozelle Storage King and Kylie runs the Revesby Storage King session.
We have 30 drop off points, volunteer drivers, as well as the home volunteers who take bags home to sort and are mainly situated in the Inner West. I manage the team, the drop off points, the home volunteers, the drivers, and am across what is coming in and out of each location.

What is your focus for Mummies in 2016?
We are assessing more closely ways to harness what we want to achieve by pinpointing our aims and goals. With 2015 we didn’t really have a plan as we were growing so quickly. We will increase our support to women’s refuges as domestic and family violence is such a big issue in Australia. With a significant cross section of demographics affected by family violence, it is one of the core groups we will be focusing on.
Another group of people in need are the homeless. We want to open up the idea that you don’t have to help in the way that you think. You don’t need to give money; you could cook a meal and provide it to the local charity, which affords privacy and anonymity to the homeless recipients.
Our constant aim is to help people for the sake of helping them, not to feel good about ourselves or putting them on display. Being that one person who can provide a mental lift and emotional support and allowing them to know that others believe in them. It’s a focus on the greater community, something I think we have lost.

How can people get involved? Is there any help you specifically need?
We are always looking for volunteers for sorting sessions which start back in February on Wednesdays, Thursdays and Fridays between 10am-12pm. Or if you are interested in being a home volunteer or a volunteer driver relocating goods from storage or collection points to the actual charity.
A focus for 2016 is to put together women essential packs for women’s refuges inclusive of sanity items, body wash, shampoo and conditioner, and then some pamper items such as lip-gloss. People often receive these items at Christmas so if you don’t think you will use it – please save it for us! We will use it so long as it is brand new and unopened for hygiene reasons. Often there is a big focus on the children but the woman is left with less so we want to give her something to make her feel special as often she has left home with nothing at all. When you receive something, knowing someone has taken the time to care – it can help.

Did you ever dream that starting the Mummies community would lead to an Australian Of the Year nomination? When do you find out?
Absolutely not! Someone had messaged Marie and I about a nomination and I initially asked her not to nominate me, as there are others who have done more. Marie finally convinced me to send her some information for the nomination and she sent it in. I later received a certificate in the mail and thought “that is not a letter you get every day!” I had just collected the kids from school so I went into mum mode of asking for clothes to be put away and starting homework etc. I showed my husband and then with the craziness of the weekend it didn’t really sink in until I put a thank you post in the Mummies Facebook group. It was through the responses that I realised how massive it was! Even now when I think about it I go “wow – seriously??” I just never would have thought about it.
It is difficult to put yourself in the same category as others when you are just trying to achieve things within your own focus. I personally struggle with accolades and it is not part of my personality to accept them easily. When you’re doing something out of passion and you don’t function for that reason, it is an amazing way for people to acknowledge your work. The finalists have been announced and while I’m not on the listing, and didn’t expect to be, regardless it is a huge honour.

What has been your most favourite achievement to date in Mummies?
It’s that moment where people realise they themselves can make a difference. Often people don’t realise the power they have and that they can change something for the better – it is something really special.
In a silly way, it is also the fact that people listen. I can’t get my 3 year olds to pick up their toys but if I post that we need kids undies people go out and buy them! It’s amazing that people are listening to the message.

If you were PM for the day – what would you do?
I would put a lot more funding into women’s refuges and hospitals. The funding for hospitals would be used to open up more beds and to better provide the Doctors, Nurses, the diagnostic, and support services. People don’t realise how expensive it is to run hospitals, and as our population is growing we need to keep investing. Otherwise it puts pressure on the resources that are left. I would also double the pay for nurses and give them 6 months maternity leave!
If I had the power, I would allocate a significant amount of money to focus on family and domestic violence. The consequence of not doing something now is so great – not only for the women, the children involved, but the for future generations. We need to provide more funding to women’s refuges and the aligned services. We need programs in place for young boys and girls and different communities to send the message that this is unacceptable. We need a greater focus on men’s programs when they have experienced family violence. People don’t realise that one incident can cause damage, let alone the several others that have already happened.
Finally, I would give the power to the people who can implement these.

I am happiest when…
Reading a great book. I might have a slight book obsession!

Your favourite Inner West spots?
I like to walk along the Bay Run in Rozelle and it seems that every 5 minutes there is another fun park to go to with the kids.